Posted on September 7, 2014 by shipleyscifi 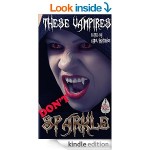 The anthology These Vampires Don’t Sparkle from Sky Warrior Book Publishing is now available in paperback and ebook editions.  My contribution to the anthology is “Safe Haven,” a story about friendship.  The fact that one of the friends happens to be Undead seeking his own kind makes this also a vampire story, but at core it’s still all about friendship.  It also has a strong art component in that one of the characters is an artist who needs to rely on his talent to save the day when all else fails.  This is the first Chapman story to make it into print, even though I’ve been writing about Chapman and his vampiric buddy Foxfire for literally decades.  In fact, I wrote the first version of this story, called at that time “The Dog and the Dead,” in the 90’s.  This later “Safe Haven” incarnation is a much stronger tale.   These Vampires Don’t Sparkle is available on Amazon here.