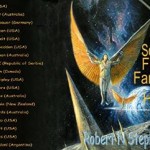 . . . The Worlds of Science, Fiction, Fantasy, and Horror, Vol. 2 for my short story “Sanguine.”  This is an Australian anthology edited by Robert N. Stephenson, the second in a series of two so far.  It all came together very tightly.  My copy of Volume 1 (pictured here) had just arrived on my doorstep when I heard back from Robert that he was buying “Sanguine” for Volume 2.  So an all-round good day for Worlds of SF, F & H.  “Sanguine” itself is a 10,000-word science fiction tale revolving around blood as a nutritional source for two alien hemovore races.  Sounds like a vampire story, but it isn’t.  Nothing supernatural about this clash of cultures.  Because of the way supply-and-demand works,  there arise viable employment opportunities for humans to serve as sangreanos — blood donors — on these alien ships.  Walking food sources, you might say.  However, it’s politically controversial.  Rightist, hawkish factions among the local human colonists think selling blood is a pandering to alien tastes — literally — when a good war would be a better solution.  So this is the backdrop of the story, and the main character, Venda Senjak, is dumped into the middle of it when she accepts a post as sangreano handler on a hemovore ship.  And the situation keeps getting more and more complicated.

The story in Volume 1, “Pale as the Noonday Sun,” is not about hemovores and sangreanos, but it is about a clash of cultures, this time between humans and a dominant saurian senient race.  The viewpoint character is a velociraptor-ish species who is very full of himself as the biggest and the baddest.  Then he encounters a human on the run from bounty hunters, and the two discover they have more in common than they’d ever dreamed possible.  You can find “Pale as the Noonday Sun” here on Amazon.